WOTR began work here in 2010 and is currently active in Khunti district. Now, we are implementing projects in Murhu and Torpa blocks. A total of 14 villages have been covered by WOTR in Jharkhand since 2010. It is at present active in 66 villages. 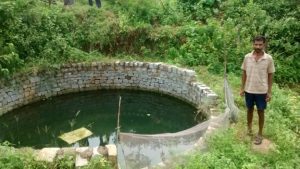 Bilkan Champi started farming in his early teens. At the time, he was helping his father when times were rough. Even now, however, there is no source of water available. Farming in the winter is impossible. The rabi season is spent working in others’ fields.

Bilkan lives in Sidu village, situated a mere 10 km from Murhu block of Khunti district. Considering the high rainfall in the region, majority of farmers cultivate rice. However, it is just enough for their own subsistence.

Bilkan owns 6 acres of land, out of which the cultivable 3 acres are located on the higher uplands where runoff is too high. Monsoons alone cannot support good production. Without irrigation, Bilkan could only sow in a tiny portion of 0.02 acres. Getting irrigation was expensive, as he was not prepared until Sidu village was included in the AHB-funded (Andheri Hilfe Bonn) Wasundhara project implemented by WOTR.

WOTR helped Bilkan build a 25-foot deep dugwell in his farm. The work was done with machines and manual labour, costing Rs 1.5 lakh. Bilkan contributed a third of this amount – Rs 54,000 – and the rest was covered by the project.

The well and subsequent irrigation has enabled Bilkan to farm a larger portion during Kharif and also take vegetable crops during the rabi season. Previously, he earned around Rs 3,000 from growing paddy in the small portion of his land.

Now, he has water all year round enabling him to not just increase the farming area during Kharif but also cultivate other crops during winter and summer. In the first summer, he planted onion and potato for self-consumption. It was tomato, watermelon and rice during kharif, making overall earnings of Rs 9,000.

Bilkan has also invested in farm bunds to ensure water retention in fields. Water retention will allow sharing water with neighbouring farmers while satisfying his own needs as well.

675 ha of land treated under soil and water conservation

Growth of 342 children monitored through the Child Growth Monitoring

Power of a Collective

Farm Producer Organisations play a major role in promoting farm-market linkages and creating opportunities for farmers. In this issue of Ecologic Feb 2018, read about how an FPO is making a difference to villages in Murhu, Jharkhand.

How often do you hear about an entire village going organic? Well, in the village of Ghagari, in Jharkhand, this is what has happened. How has this shift changed things for the farmers there?

A path to guaranteed self-Sufficiency

How does WOTR’s work contribute to self-sufficiency at the village level? And how can this be scaled up nationally and internationally? Read this German article, by Elvira Greiner, president of our long-time funder and partner Andheri-Hilfe Bonn.