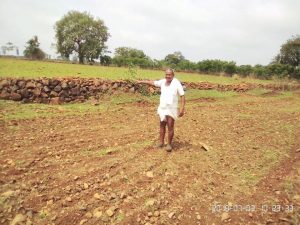 Dumari Singh belongs to Banar village in Madhya Pradesh’s Mandla district. Singh is one of those farmers who had to migrate outside of his village for livelihood.

Despite owning 2.5 acres of land, prior to 2012, he would earn barely Rs 1,000 a month, during the kharif season (July-October), due to poor soil quality in his farm. He would often migrate to Mandla, Raipur in Chhattisgarh and Dholpur in Rajasthan in search of agricultural labour work, where he earned slightly more – Rs 2,000 – 3,000 per month, during the rest of the year. Often when the rains were bad, Singh spent the entire year working outside.

In 2012, WOTR took up watershed development project in Banar, after which Dumari Singh could grow and harvest kodukutki (inferior millets), and later in 2016, he started growing arhar (pigeon peas) and toor (split peas). He was able to earn an average of Rs 3,000 per month during kharif and about Rs. 2,000 in rabi.

It was after seeing the success on such a demo-plot that Dumari Singh eventually shifted to using organic inputs like vermicompost and dashparni ark (an organic pest and insect repellant) in 2017.

Dumari Singh expresses his appreciation for the benefit WOTR’s initiative has brought to him, and says he had never imagined that he would able to grow food on his land again due to the bad soil quality.

“Now I am able to grow paddy, kodokutki and arhar, maize and sesame in my own plot. My input costs have also reduced a lot after using home-made manure like vermicompost. Expenditure on fertiliser has reduced by about 50% annually over a single season after using vermicompost and other organic manure,” Singh says.

1,416.03 ha of land treated under soil and water conservation

Under the agro-meteorology initiative, to help climate resilient agriculture, 10,904 advisories were sent to 514 farmers

A total of 156 smokeless chulhas were given out to women

Four training events conducted on the subject of organic formulation

Reached out to11,929 households during the course of the year

WOTR was the knowledge partner for the SLACC project, implemented in 100 villages of Sheopur and Mandla districts

In ‘Leadership, Enterprise and Empowerment’ we bring to you stories of how poor villagers in Madhya Pradesh’s tribal dominated villages are able to carve out a better life for themselves, thanks to WOTR’s interventions. WOTR’s Wasundhara approach has empowered people there.

Women empowerment and SHGs play an important role in decision making at the village level. In this case study, we see the women of Birolipar take action by uniting against a teacher for frequent absenteeism and neglect of schoolchildren’s education. The collective action led to decisive action by the government.

WOTR’s work in MP spans many thematic areas, and touches lives of thousands of people. See our video to know more about the work we do.

Mukhas and Chittaphal are two tribal dominated villages of MP. Prior to WOTR’s intervention, they were politically powerless, poverty stricken and subject to large scale out-migration. Livelihood opportunities were limited. WOTR’s intervention has changed the lives of the local people there and made them more self-sufficient and prosperous.