Addressing the issues of household income of landless and poor

Addressing the issues of household income of landless and poor 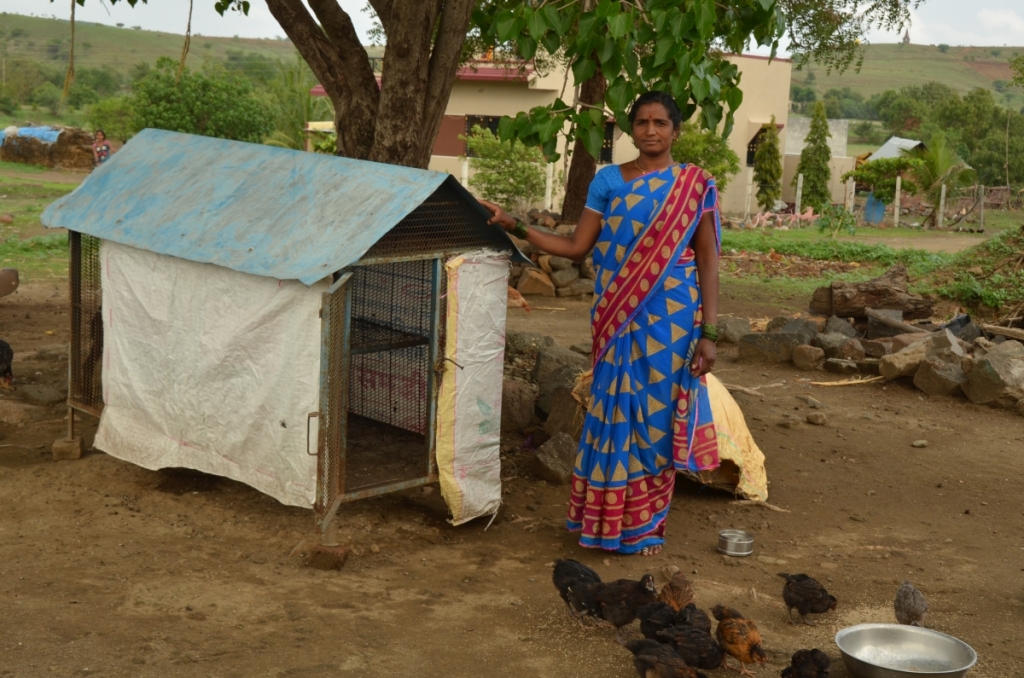 Raising daily wage work is the second-highest source of income, followed by agriculture. However, as agriculture becomes less remunerative due to an increase in the cost of cultivation and fewer crop returns from climate change, alternate livelihoods for household (HH) income gain a prime role. It is especially true in the case of small and marginal farmers as well as the landless HH.

With less than 1Ha or zero landholdings, a large percentage of households have inadequate earning. Hence, these HH have limited access to better education for children, meeting daily nutrient requirements, or having access to financial support under emergencies. Further, not having any additional skill or financial aid, they cannot identify alternate income generation activities/ work or start a small-scale business. With the division of families from large to nuclear families, there is less labour available at the HH level to take charge of agriculture, livestock, wage works, etc. Therefore, these households (HH) are highly marginalised and financially constrained.

It was essential to design some interventions that can enhance the HH income with low-cost investments and need minimum maintenance, in other words, with low labour requirement. One such intervention is poultry rearing. The Back yard poultry (BYP) night shelters were designed to provide an alternate source of income generation.

Poultry production has been a household activity in rural India since time immemorial. Traditional methods of poultry farming play a significant role in HH level nutritional security, women empowerment and add to the HH economy. However, high disease incidence, lack of immediate medical input to these rearers, the high mortality rate due to attack by dog/snakes, predation, shortage of scavenging area, malnutrition in birds pose as hindrances in poultry farming. Due to this, women in rural areas don’t see this as a viable alternate income generation activity.

To make poultry farming profitable and an income-generating activity, a backyard poultry night shelter (BYP- night shelters) is provided to every household. Training to convert this into a profitable HH-level business activity using the night shelters is provided. In addition, farmer field schools help to increase awareness among the community. The night shelter has three compartments which will allow separation of newly born from other hens, separation of diseased hens/chicken, and allow to make space for hatching the eggs and can fit more hen at a given time. It allows the farmer to increase the number quickly by reducing the mortality or loss due to scavenging, especially during the nighttime. We can also lock them inside with food and water if they go out for more extended periods. It acts as a safe shelter.

Sunitha of Antwar village comes from a landless, poor household. They have three children. Daily wage works (agriculture labour and works in the Narayanpet market) are the only source of income for her family. These labour works fetch Rs.10000 per month, making an annual income of Rs.1, 20,000.00. With such less yearly income and zero landholdings, they have no financial security.

Explaining their financial situation, Sunitha says, “As education is very crucial for my children we are sending them to the local school. But we are not in a position that we can continue to do so as they grow up. I worry about their future. With very less income I don’t know if we can give them a good education.”

Identifying this, WOTR supported her family by providing a backyard poultry night shelter under the project funded by Axis Bank Foundation (ABF). After getting this night shelter, Sunitha has purchased three chicken/hen with an investment of Rs.1500 and started poultry rearing.

With this small investment, she was able to increase the flock size to 48. As shared by Sunitha, with the help of a night shelter, she could increase the bird number in a short period. Without this night shelter, she observed that birds undergo high mortality due to attacks from predators, especially during the nighttime. Disease spread during the winter or summer season is a big issue for losing all the birds at once. Now there is safety for the birds during the night, and three compartments in the cage allow to separate the diseased birds from healthy birds. Further, it is easy to keep a separate space for hatching the eggs. Therefore, it is easy to ensure the safety of the birds and increase the flock size simultaneously.

In March 2021, Sunitha sold 20 birds for ₹500 – ₹600 each at a local festival. She earned a total income of Rs.11, 000/- so far in the last two months. This income from BYP night shelters is an alternate source of livelihood with very minimum investment and requires no additional labour from their house. Purchase of new hen initially and daily feed to the chicken, hen and chicks are the only investments in backyard poultry rearing. She purchased 2 hen initially to start rearing with Rs. 500 each. The feed provides three times a day and includes Jowar, broken rice and powder obtained post rice polishing (thaudu). The broken rice and rice doesn’t need any additional investment as they get them for free through PDS.  As shared by Sunitha, they spend around Rs. 11,700 every year for purchasing the feed (Jowar and rice powder). As of now the eggs laid by the hens are kept for hatching further and for household consumption.

Their children also contribute in feeding the sheltering the hen, chicks/chicken in her absence. BYP rearing gives a sense of financial security during difficult times and addresses the house’s immediate financial requirements.

Similar is the story of M Ashamma, a resident of Eklaspur village in Narayanpet Mandal. Anshamma and her daughter both are single women with one girl child. They are landless households with daily wage works as agriculture labourers. From these wage works, they earn a total of ₹6000 per month. With such less annual income, they cannot meet their basic needs, and there is no financial security in times of crisis. Although Ashamma has been doing poultry rearing for more than five years now, it was not seen as an income generation activity. Considering this, Ashamma was supported to have a night shelter for her poultry rearing as part of the project.

Now she is rearing a total of 20 to 30 birds in a month. She sells cockerel/roosters every two weeks or every month. Every month two or three chicken are ready for sale, and they will have eggs hatching simultaneously. She is now earning around ₹600-700 per chicken sold in the market. Having the night shelter, she can keep the chicken safe to age to a good size and weight, fetching her a good price.

Ashamma shares that “these night shelters are very useful and also easy to maintain. When I go out of my village, I keep food and water and lock the chicken in this shelter. They remain safe and fed till I return home. The compartments in the shelter provide good space for the hen to hatch eggs and it is easy to maintain more birds. Which was not possible before. ”

She sold a total of 30 chicken for a price of Rs.600 each. Deducting the daily expense which their family is meeting from this additional income, she could save ₹10,000 in just two months.

She plans to sell more birds in the coming months. Ashamma shares that “this additional income creates a sense of financial security for me and my family. We were constantly under financial stress with no security. Having this night shelter gives us an opportunity to generate income at a very low cost and provides security with additional income.”

Ashamma and Sunitha are just an example. Like them, a total of 400 HH have been benefiting from this alternative income generation activity for the past two years. Manikyappa, a landless HH beneficiary from Sheranpally, plans to purchase another night shelter, increase the folk size and gain more income. Of the total households, while 230 HH are traditional rearers, 170 HH have newly taken up this activity. The activity was intentionally designed not to give hen/chicken but just the night shelters. All these rearers have purchased the hen/chicken required to start the rearing on their own. It brings in ownership among the beneficiaries. Even if there is a fatality on a larger scale due to disease incidence, they continue this activity by purchasing new hen/chicken. Hence, the sustainability of the intervention continues for an extended period.

*Please note that this total income is calculated annually considering the total chicken ready for selling during the data collection for this case study.