Protecting our Agro-ecosystems – the EbA way

Protecting our Agro-ecosystems – the EbA way

The repercussions of climate change are becoming increasingly real and frightening with each passing day. While global warming has had a significant impact on modern agriculture, interestingly, the sector is also one of the contributors to climate change. Indiscriminate use of chemicals and exploitation of natural resources is making the agri-sector increasingly unsustainable. However, we can overcome this challenge by nurturing and restoring our agro-ecosystems. This can address multiple issues – ranging from food security and livelihoods, to the general well-being.

Despite being largely considered as agricultural activities, the term ‘agro-ecosystem’ comprises much more. Besides the core human activity of agriculture, agro-ecosystems also include the complex interactions between biotic and abiotic factors such as crops, pastures, livestock, flora and fauna, soil, water, etc. Further, the dynamic relationship between commercial agriculture and socio-economic factors makes agro-ecosystems more complex than natural ecosystems.

In today’s times, commercial agriculture is viewed as a double-edged sword. On one hand, higher food production is serving the basic needs of rapidly rising population.  On the other hand, indiscriminate use of chemicals to enhance agri-productivity, is putting severe pressure on our ecosystem – ruining soil health, increasing green house gas emissions and depleting ground water resources. In the long-run, these unsustainable practices will threaten the potential of agriculture, forestry and fishery, and impact the benefits and services of these sectors. 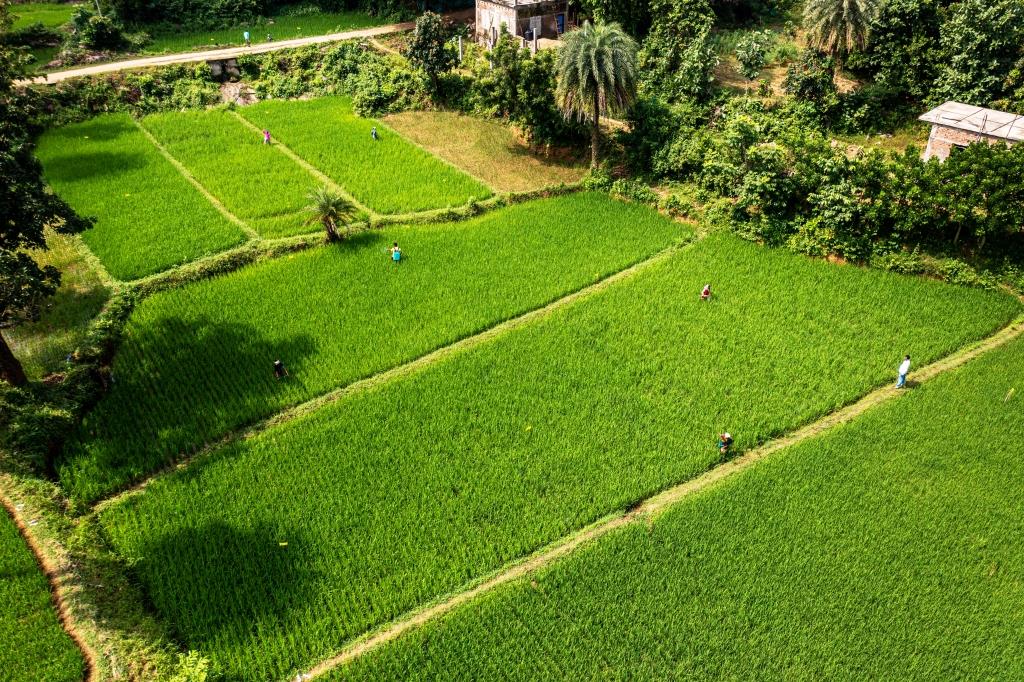 How climate change is impacting agro-ecosystems?

According to the IPCC Sixth Assessment Report, climate change has already created a significant stress in the agro-ecosystems, thereby declining the capacity to mitigate extreme climate and leading to loss of precious lives and resources. The direct solar radiations (enormous amount of heat/energy) striking on the earth’s surface is trapped by Green House Gases (GHGs) like carbon dioxide (CO ), methane (CH ), nitrous oxide (N O), hydrofluorocarbons  (HFCs), resulting in atmospheric temperature increase. The concentration of carbon dioxide is currently at 412 ppm that represents a 47% increase since the beginning of the Industrial Age.

While the entire impact cannot be measured, we know that the effects are irreversible in some cases. Here are some of the specific effects of climate change on our agro-ecosystems:

Field Crops: The human-induced warming has reduced farm yield and also caused increase in pest and pathogen attacks. Also increasing mono-cropping the system is gradually reducing land’s resilience to climate change stress. Climatic changes driven by increasing Green House Gases (GHGs) possibly affects the yield and productivity of agricultural crops from region to region. Studies conducted by the National Innovations in Climate Resilient Agriculture (NICRA)suggests rice yields (both irrigated and unirrigated) are projected to decline between 2050 and 2080. Further, wheat yield is projected to reduce by 6-25% in 2100 and maize yield by 18-23%.

Extreme climatic events have also damaged the nutrient content of food crops. The IPCC report also warned that the protein content of rice, wheat, barley and potatoes could fall by 6 to 14%, putting close to 15 crore more people at risk of protein deficiency.

Livestock, Poultry, Fishery: Heat stress, erratic weather and increase in chemical supplements has a major impact on the physiology of livestock and poultry. High temperatures are causing abrupt changes in animals’ bodies, leading to disruption in respiration, blood flow and overall resilience. In milch animals, this is leading to a reduced intake of dry matter and consequently, decreased milk production. Climate change is also causing frequent diseases and higher mortality in animals.

Similarly, rise in sea levels due to global warming has decreased sustainable yields of some wild fish populations and has altered the distribution of cultivated, wild terrestrial, marine and freshwater species. Further, uncertain monsoon and frequent cyclones are also reducing the number of fishing days hitting the small-scales fishers across regions.

Forests and Water: Forests and tree-based systems support modern agriculture by increasing crop and livestock productivity. However, in the recent past, the world has witnessed several disturbing incidents of wildfire, causing massive destruction of forest cover and biodiversity. Warmer and drier weather conditions induce fire, drought and insect attacks, while wetter conditions increase disturbances from wind and pathogens.

Livelihoods, Economy and Well-being: Agro-ecosystems have a direct and significant contribution to livelihoods, especially for the rural and marginalised. 70% of our rural households still depend primarily on agriculture for their livelihoods. India is the one of the largest producers of several grains, pulses, milk, fruits and vegetables. Agriculture alone contributes nearly 20% to the country’s GDP.

The impact of climate change is not restricted to loss of livelihoods for farmers and traders, but it also affects food inflation – triggering the vicious cycle of poverty, food insecurity and malnutrition.

Government of India’s economic survey (2018) estimated that the annual loss of US$ 9-10 billion was due to the adverse effects of climate change. 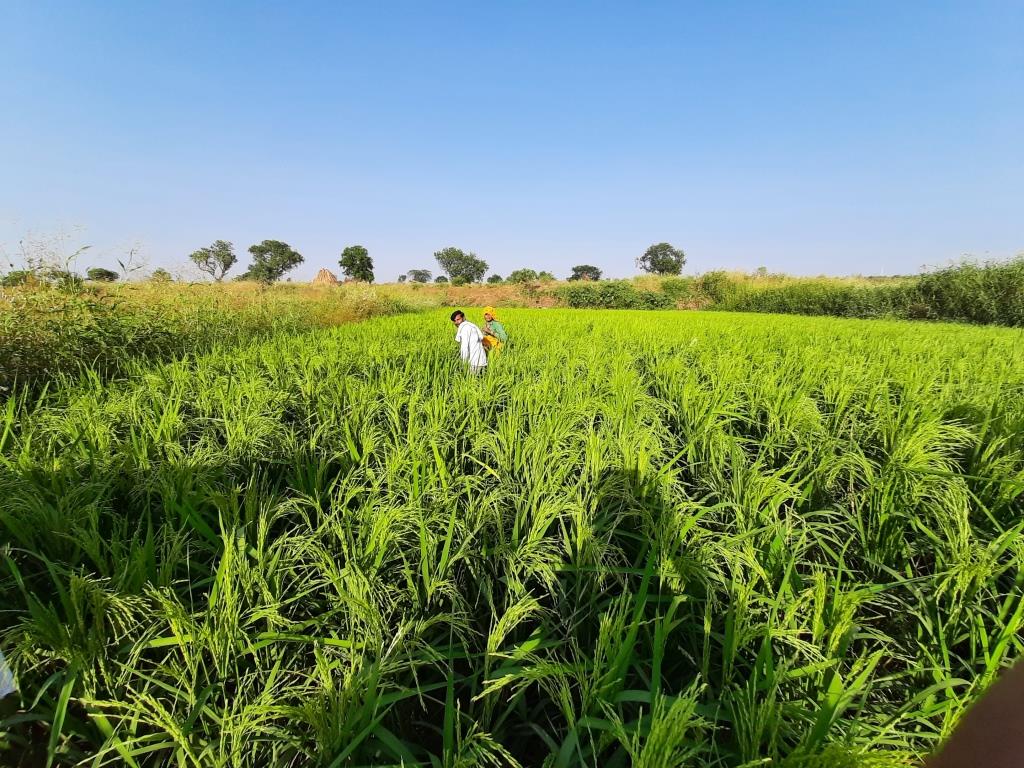 What can be done?

Undoubtedly, ecosystem deterioration is the harsh reality of current times. However, with the right strategies and action plan, we can still mitigate the risks to a good extent. As the UN Secretary-General António Guterres  said, “the climate emergency is a race we are losing, but it is a race we can win.”

While there is an urgent need to restore the ecosystem by conserving the natural resources and making agricultural processes eco-friendly, we also need to give an equal impetus to building communities’ resilience. The long-term sustainability of food production is intrinsically linked to the wise management of agro-ecosystems and biodiversity for food and agriculture. Ecosystem services, such as water flow regulation, nutrient cycling, pollination, pest and disease regulation, and seed dispersal are critical for agriculture and food security.

Fortunately, nature provides us with the biggest support in this endeavour. Nature-based Solutions (NbS) can make development and conservation co-exist in harmony and play a huge role in revival of the ecosystems, including agriculture and allied domains. When deployed properly, NbS can deliver a triple benefit, i.e., supporting agricultural production, mitigating climate change, and enhancing nature and biodiversity.

EbA is a nature-based and human-centric approach to adaptation and aims to restore the ecosystem by building the resilience of communities, encouraging participatory governance and ensuring food security. EbA works as a holistic approach as it fulfills the following criteria:

Worldwide, experts and researchers have accepted that if climate change is not tackled with urgency, we are putting the lives and wellbeing of billions of people and future generations at stake. The impact of climate change on agro-ecosystems has been a cause of ultimate concern to economists, ecologists and agriculturalists as it directly impacts numerous goods and services.

We have already been witnessing the adverse impact of climate change in the last few years, which was further intensified by COVID-19. The pandemic, besides causing a dramatic loss of human life, has also led to a significant loss of livelihoods, especially in the unorganized sectors. Reduced household incomes clubbed with disruption in supply chain led to the adverse impact in food security and nutrition too.

Weather extremes, frequent natural disasters and fast depleting natural resources have become a regular phenomenon in our surroundings. Climate change mitigation is only possible by working in sync with nature – and EbA makes it possible.

There is no universal blueprint for EbA, but there are well accepted guidelines on how to plan and implement EbA projects. Successful implementation of EbA for ecosystem restoration is only possible through systematic, collective action. For this to happen, stakeholders need to join hands on research, implementation, policymaking and investments, thereby contributing to the global cause.